MINISTRY IS COMMITTED TO SUPPORTING SALATIGA AS A GASTRONOMY DESTINATION 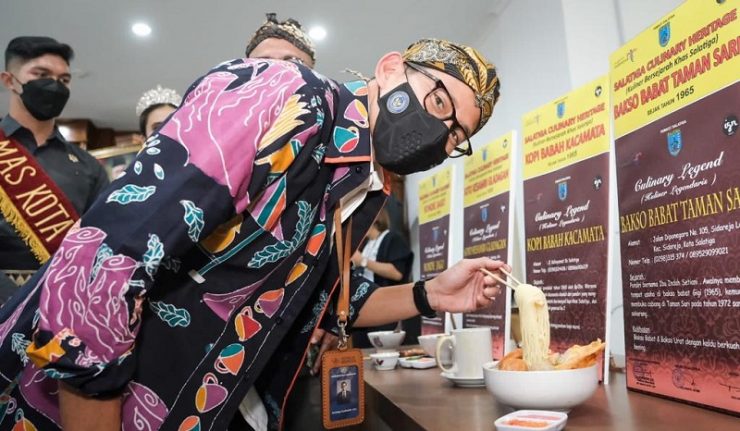 THE MINISTRY of Tourism and Creative Economy is committed to supporting the development of Salatiga City as a gastronomic city in order to strengthen tourist attraction so that it can support economic development by opening up job opportunities in Salatiga.

“The Salatiga City Government after the COVID-19 pandemic developed gastronomic tourism to become a tourism attraction and creative economy. This is because gastronomic tourism does not only offer culinary experiences as usual, but also presents cultural and historical experiences behind the presence of a food menu,” said Sandiaga Uno.

Gastronomy itself is a science that discusses good eating habits (good eating habits) or can also be associated as something related to the enjoyment of food and drink. However, more than that, gastronomy is not only about the food and drinks served on the table, but the science that studies the intricacies of the story behind the food itself. Starting from the history of food, the origin of food ingredients, processing, cooking methods, to how the food is eaten.

Sandiaga explained, Salatiga City has great potential to be developed as a gastronomic destination. Mainly because of the variety of typical culinary delights that are the mainstay of the City of Salatiga. Among them are Sate Sapi Suruh, Opor Bebek, Soto Esto, Gecok Kambing, Ronde Sekoteng, Enting-Enting Gepuk, and the iconic Salatiga specialty dish is Tumpang Koyor.

Tourism Ministry said Sandiaga would provide support in various sectors, both through a budget approach, attendance (visit), as well as a regulatory approach.

It is hoped that these Tourism Ministry programs can increasingly become a new economic revival order in accordance with the direction of President Joko Widodo to formulate a new normal for the transition from a pandemic to an endemic.

Sandiaga said that other support was organizing events both on a national and international scale as part of the development of the Borobudur super priority destination. We will also hold several events here. Based on suggestions from the community, earlier I gave homework (homework) to the community to make events.

In addition, what is no less important is that the Ministry of Tourism supports improvements in terms of ecosystems through culinary education, improving service quality, cleanliness, health, as well as digitizing and strengthening other ecosystems.

“I want this ecosystem to also side with MSMEs because all this time MSMEs have continued to support our job creation and our economic recovery and all must join hands to make Salatiga’s journey as a gastronomic city a success,” Sandiaga noted.

With this support, it is hoped that tourism and the creative economy in Salatiga can really encourage economic revival and create job opportunities.

“Culinary is growing rapidly in the midst of a pandemic where it is able to contribute IDR1,274 trillion or 7.35% of the total national GDP in 2021. The latest data from Central Bureau of Statistic (BPS), 20 million jobs were contributed by the creative economy sector and if we look at a total of 20 million workers in the creative economy, 34% or almost 10 million are workers in the culinary sector,” Sandiaga concluded. [traveltext.id]