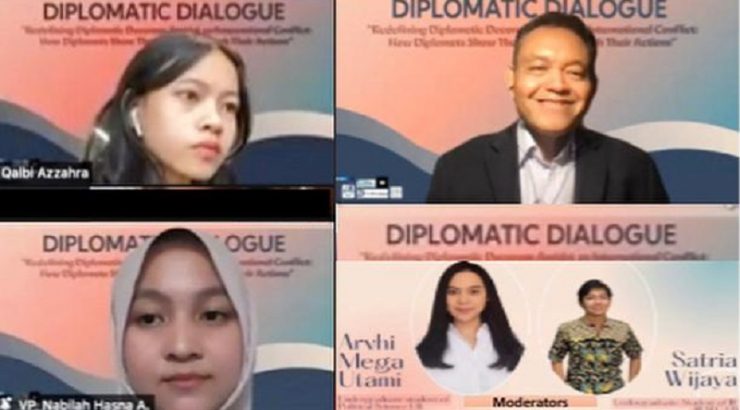 SHORTLY before Eid El Fitr 2022, I was invited to be a speaker at a webinar hosted by the Foreign Policy Community of Indonesia (FPCI) Chapter Brawijaya University (Unbraw), titled “Diplomatic Decorum Amidst an International Conflict: How Diplomats Show Their Stance through Their Actions”.

A thought-provoking subject against the background of our shifting global and political landscape, if I may concur at first.  The session was held with the purpose of providing a forum for university students to develop their discussion skills on foreign policy, on top of receiving perspectives on international events that pose a direct impact on Indonesia (RI).

It came to my understanding that hearing empirical insights from senior diplomats would be beneficial to the attendees. For instance, the prospect for peace in the Russia-Ukraine conflict seem bleak at the moment—with the possibility of a drawn-out war between Western-supplied and – supported Ukrainian forces and the large Russian army becoming more evident by the day. Moreover, it is important to note that its impact may not merely be restricted to the Ukrainian borders.

“Walk out” and diplomatic manners
At the webinar, one of the most debated topics included walking out at a conference; more specifically, “Is walking out in accordance with the customs and manners in diplomatic relations?”

In conference diplomacy, threats and warnings may arise. According to International Relations expert Johan Kaufmann in his book Conference Diplomacy (1970), when a group of delegates in a session does not participate or intentionally leaves the room as the chairperson gives the opportunity for delegates from other countries to speak; this phenomenon may occur, albeit not often. I further added that while walking out demonstrates disagreement, the act itself does not affect the decision-making process.

As seen at the G20 Ministerial Session in Washington DC, April 20, 2022, the United States delegation and several countries walked out as soon as the Russian representative began to speak. In response to this, the Indonesian Finance Minister Sri Mulyani Indrawati stated that differences in attitudes towards war would not hinder G20 cooperation or prevent collaboration to overcome other areas of problems, such as the global pandemic and taxation.

A diversity of perspectives
During the webinar’s interactive discussion, different views on walk out were expressed. Walking out may be seen as the right of every delegation in taking a political stance on behalf of their government. This attitude is an attempt to exert “pressure” on other parties who hold different positions.

Another view states that the act of walking out is not commendable, especially with respect to the discussion items that have previously been agreed upon for the session’s agenda. The case of the Russia-Ukraine conflict is not related to the mandate of the G20—as such, the act of walking out in this case could be seen as highly misplaced.

The other perspective is taken from the G20 leadership factor as the baseline. This consideration arose because the leadership, in this case Indonesia, did not side with any of the conflicting parties; with the country maintaining relations with both. Therefore, if the conflict drags on, other global geo-political and geo-economic conditions could be seriously affected, including countries in Southeast Asia.

Indonesia as the holder of the G20 leadership
I conveyed that President Joko Widodo’s statement on 29 April 2022 showed Indonesia’s firm stance on this issue. It becomes very clear that the President wants Indonesia to unite the G20. “Don’t let there be a split”, he stated. As the holder of the mandate of the G20 Presidency, he has communicated with a number of state leaders and the Secretary General of the United Nations.

This assertion shows that efforts to bring together conflicting countries at the negotiating table is challenging. I believe that Indonesia as the Chair of the G20 can invite all warring parties and NATO, China and Russia and others to sit down together to discuss matters of economic improvement, should the conflict drag on.

This is the time to show our free and active political principles, especially in line with the opening of the 1945 Constitution where Indonesia is committed to maintaining world peace and order.

I am of the view that diplomacy has become a vital part of state interactions and is the main means of dealing with international conflicts, in order to achieve world peace and prosperity. The principles and functions of diplomacy serve as guidelines for all countries to achieve common goals. However, it requires support and collaboration from all participating elements.

The Russia-Ukraine conflict has affected the global economy, notably financial sanctions, commodity prices, and supply chain disruptions. While the process of post-pandemic economic recovery is still ongoing, the key to the stability of security includes being active in easing global conflict tensions. Indonesia is believed to be able to resolve this conflict through its firm stance and concrete role.

Lastly, I would like to commend Brawijaya University for actively promoting Indonesia’s position as the G20 Chair by holding open discussions with students and academicians. Such initiatives are in accordance with the principle of free and active politics carried out by Indonesia. [Author: Bagas Hapsoro (Indonesian Ambassador to Sweden, 2015-2020). The views expressed are the author’s own.]