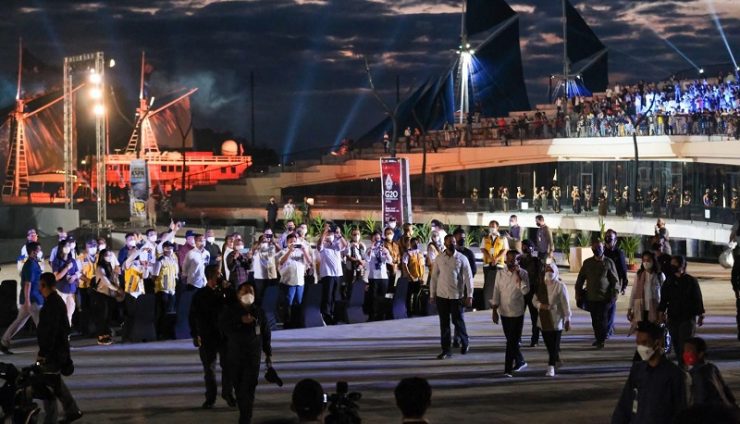 THE INDONESIA’S government hopes that with the construction and inauguration of supporting infrastructure facilities in Labuan Bajo, it will be able to attract the number of tourists who come to the westernmost city on the island of Flores.

According to President Joko Widodo (Jokowi) when inaugurated the arrangement of the Labuan Bajo Marina area and the Warloka Waste Management System located in the Marina National Tourism Strategic Area (KSPN), Labuan Bajo, West Manggarai, East Nusa Tenggara, Thursday (7/21) said I was reviewing direct infrastructure and facilities. Starting from the expansion of the airport, where the project is able to accommodate one million tourists which is expected to increase tourist visits to Labuan Bajo.

“Then I also reviewed the readiness of Rinca Island’s infrastructure. And lastly, my group was treated to attractions from tourism and creative economy actors in West Manggarai at the water front or Marina Labuan Bajo,” said President Jokowi.

The last thing that was very epic and majestic, continued the President, was an art and cultural music concert with views of the water front or Labuan Bajo Marina which had just been laid out and served to tourists. And what is also interesting is the integrated waste management. Therefore, these existing facilities will be the main attraction of Labuan Bajo which can be used to improve the welfare of the people in NTT, especially Labuan Bajo.

“However, there is still a lot of homework to be done, including the readiness of the community to maintain the facilities that have been built by the government so that they are clean, free of waste, and the people are friendly to tourists. That is the main task that must be completed together and also train creative economy players so that Labuan Bajo has competitiveness, not only in Labuan Bajo but also in Flores and NTT,” President stated.

The President explained, the Indonesian government is also increasingly optimistic about the attractions built by the government starting from the water front to the arrangement of the Rinca Island area, then supported by other tourist attractions such as the Batu Cermin Cave, tourist villages, cultural diversity, and creative economy products. .

“We will do promotions so that we place Labuan Bajo as a leading destination. We are quite confident with the target of 1.1 million tourists per year that I gave. And I also mentioned that the arrangement of Labuan Bajo as a super priority tourism destination (DPSP) aims to provide an economic impact for local communities,” President Jokowi remarked.

He added that the face of NTT, the face of West Manggarai, the face of Labuan Bajo, I have seen from morning to night have completely changed. I think that Labuan Bajo has changed since it first arrived in 2015, where it has now been better and more beautiful. Therefore, I emphasize that this area must be treated and maintained properly.

“First, friendly to tourists. This is very important, okay? Second, don’t litter, because now Labuan Bajo is clean and beautiful. Don’t litter, okay? Every month of community service, cleaning, so that this area continues to be well maintained and becomes more beautiful from day to day,” he concluded.

After the arrangement, the Head of State hopes that the community can use the Marina-Labuan Bajo area for various activities. This can be used for activities, cultural arts activities, performing arts, which will attract more tourists to come to Labuan Bajo. [traveltext.id]