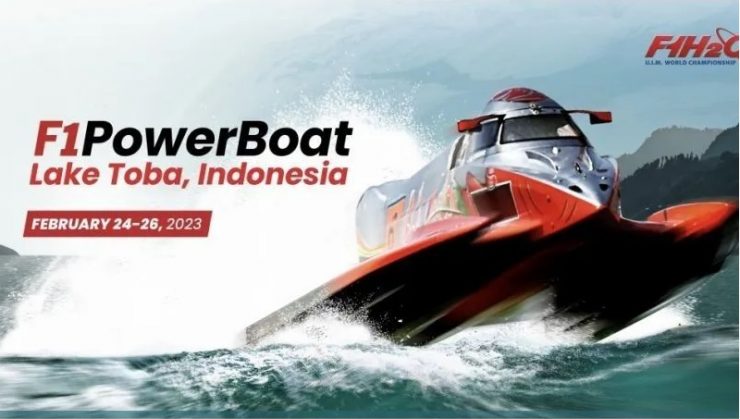 INDONESIA’S Minister of Youth and Sports, Zainudin Amali, said that Lake Toba has the trust to host the F1 Powerboat (F1H2O) World Championship for the next five years or until 2027.

This year, Lake Toba will open a series of the world’s most prestigious super-fast boat racing events on February 24-26. Amali revealed that the F1 Powerboat title is one of the efforts to encourage destinations in Lake Toba which are included in the super priority.

“The Powerboat World Championship is organized by the Union Internationale Motonautique (UIM) and sponsored by H2O, so it is often referred to as F1 H2O. The championship is the highest class in the Powerboat race which also bears the name F1 like a car racing race,” Amali said in an online Media Gathring on Tuesday.

Thus, Amali hopes that this activity will have a positive impact on the community, one of which is to improve the economy both regionally and nationally.

“One of the efforts to encourage economic recovery and growth is through tourism activities and sports events. The organization of sports events in tourist areas is expected to further increase the economic pace of the community,” he said.

As for the success of this event, the Director General of Information and Public Communication of the Ministry of Communication and Information Technology, Usman Kansong, said that internet connectivity and telecommunications facilities in F1 Powerboat will be equivalent to the MotoGP event in Mandalika.

“Kominfo has coordinated with cellular operators such as Telkom and Telkomsel and others so that communication in organizing F1 Powerboat is smooth, as are the communication facilities that we prepared during the Mandalika MotoGP (2022),” Usman said.

With the preparation of the telecommunications infrastructure, local and foreign media crews who are present to cover the international sports event are expected to be comfortable at work, especially when sending videos, pictures and news to their respective offices or countries.

“We get praise because the internet capacity is 5G (at the 2022 Mandalika MotoGP), so they are very fast for the media, especially in sending pictures to their respective countries,” he added.

Meanwhile, in public communication, continued Director General Usman, the Ministry of Communication and Information is tasked with communicating to the public at large about the implementation of F1 Powerboat. For this reason, the Ministry of Communication and Information will prepare media crew coverage facilities, starting from registration, Media Center and a number of other facilities to facilitate coverage during the race.

“We are also trying to contact or coordinate with a number of foreign media because it is an international event whose fans are very large, the audience can be up to 140 million (people) who watch on television and also come directly to Lake Toba,” he concluded.

The organization of F1 H20 Toba 2023, apart from being a world racing agenda, is even more important to promote Lake Toba as a super priority destination. Supporting what was conveyed by the Minister Youth & Sports, Usman also emphasized that the organization would help encourage the rise of MSMEs, especially those around Lake Toba. [antaranews]