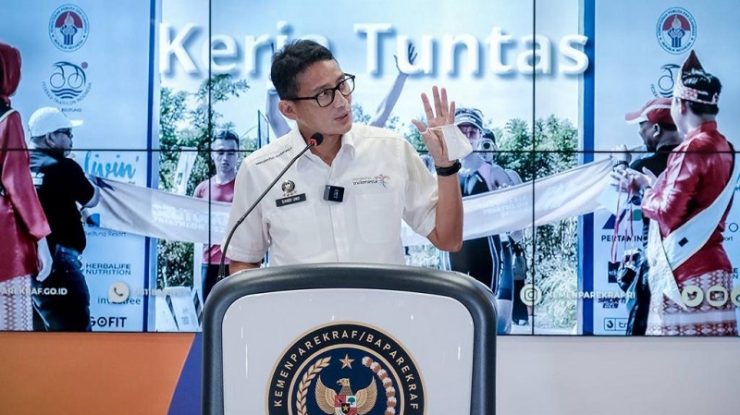 THE MINISTRY of Tourism and Creative Economy asks all tourism and creative economy stakeholders in Labuan Bajo, East Nusa Tenggara, to be able to exercise restraint and promote dialogue in resolving issues related to the development of the tourism sector and the creative economy.

According to the Minister of Tourism and Creative Economy, Sandiaga Uno in the Weekly Press Briefing which took place in a hybrid manner at the Sapta Pesona Building, Ministry Office, Monday (8/1) in response to the issue of the strike of tourism and creative economy actors in Labuan Bajo related to the increase in the entry price of Komodo National Park, especially on Komodo Island and Padar Island, as well as the surrounding waters.

“Regarding the strike plan, I urge all creative economy tourism actors to exercise restraint, continue to prioritize dialogue in a transparent, open manner, with a cool heart with a calm mind. make sure there will be no negative effects,” said Sandiaga Uno.

So far, Sandiaga continued, the Ministry of Tourism has actively opened a dialogue and accommodated the aspirations of all tourism and creative actors in Labuan Bajo.

“We are opening up opportunities for discussion, looking for solutions for creative economy tourism actors and this has been led directly by the son of Labuan Bajo who is in charge of the Ministry of Tourism and Creative Economy, namely Vinsensius Jemadu as Deputy for Destination and Infrastructure Development and also Managing Director of the Labuan Bajo Flores Authority Management Agency Shana Fatina,” Minister Sandiaga stated.

Sandiaga also ensures that all aspirations and inputs from the community are accommodated and brought to cross-ministerial/institutional forums. Both with the Ministry of Environment and Forestry, the Provincial Government of East Nusa Tenggara, and also to higher forums.

“To be able to continue to ensure that we can continue to do conservation efforts, we can also do efforts to improve the economy together,” he noted.

As President Joko Widodo said in Labuan Bajo some time ago, the two efforts were carried out in tandem. How can we ensure that conservation efforts protect Komodo dragons. At the same time, we also ensure that the economic side of the welfare of the community is related to the interest of tourists to visit Labuan Bajo which we hope will stimulate the economy and increase people’s income.

“For people who want to see Komodo, the Rinca Island area is provided with no price increase at all. Tourists visit the Rinca Island area which has been completed. Second, there are other areas that the government has prepared as an alternative option while on vacation in Labuan. We have completed Bajo and this and destinations such as Batu Cermin Cave, Waterfront, and so on can also be visited,” Sandiaga noted.

On that occasion, Sandiaga also said that the Indonesian government paid great attention to controlling the Mouth and Nail Disease (PMK) outbreak as well as the threat of monkeypox.

“We believe that our firm decision when dealing with PMK is highly appreciated. And the Minister of Agriculture, Minister of Health, has issued a statement that we can control this PMK outbreak,” said Sandiaga.

He concluded that regarding the monkey pox outbreak, we must convey to the outside world that Indonesia is very serious in dealing with the threats of outbreaks and new variants of the COVID-19 disease and other diseases. So there is no need to worry about visiting Indonesia, everything is under control and in a safe and comfortable condition for tourists. [traveltext.id]

TOURISM, which is one of Indonesia’s mainstay sectors, is also the government’s focus in the National Economic Recovery (PEN). Through a forum that was also broadcast offline by the Journalist’s Media...