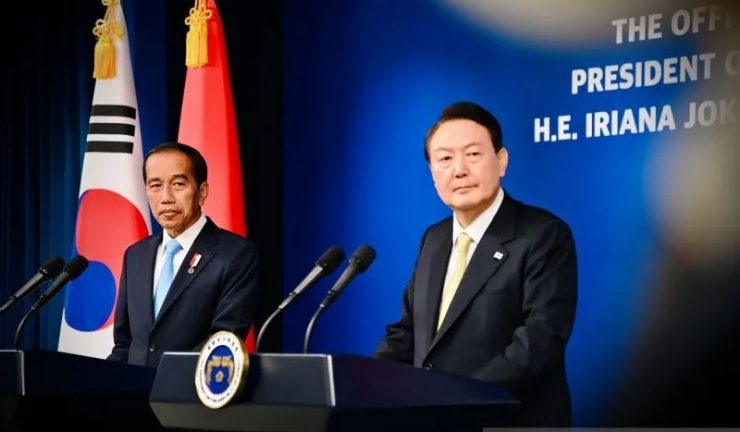 PRESIDENT Joko Widodo said that South Korea agreed to support investment in Indonesia, including development in the National Capital (IKN) of the Nusantara, with a total investment value of US$6.37 billion.

Jokowi explained that South Korea’s support for IKN development was also carried out through the signing of a memorandum of understanding on investment cooperation between PT Krakatau Steel Tbk (KRAS) with the Ministry of Investment and Posco Korea.

The collaboration between Krakatau Steel and Posco agreed to invest in the expansion of steel production capacity, especially in the automotive steel industry for electric vehicles, as well as Posco’s participation in the development of IKN Nusantara. The investment from the cooperation is estimated at US$3.5 billion.

“In addition, the South Korean government has also agreed to build a wastewater treatment plant for IKN Nusantara. The total investment value reaches US$6.37 billion and will absorb more than 58,000 workers,” said Jokowi.

Meanwhile, based on an official statement from the Minister of Public Works and Public Housing Basuki Hadimuljhono, the Indonesia-South Korea cooperation also includes the construction of water purification installations.

Basuki said the South Korean Ministry of Environment would help through grants to build a water purification installation with a capacity of 300 liters per second.

“We saw yesterday at the Hwaseong Water Purification Plant. In my opinion, this is the best available technology that has been applied by South Korea so that it is ready to drink because the processing is finally carried out using the ozonation method,” said Basuki.

“This smart village project is planned to be built in 2023 with support from South Korea,” said Basuki.

To connect IKN Nusantara with the City of Balikpapan, the South Korean government will also assist in the construction of an underwater tunnel or immerse tunnel in accordance with the concept of a forest city.

“We want to protect proboscis monkeys, fauna and other endemic flora around Balikpapan Bay. For that, we will not build bridges that physically change the morphology of the environment, but we will try to build immersion tunnels like in Geoje, Busan,” said Basuki.

Currently, the project is undergoing a feasibility study, then this year it will continue with the basic design, so that construction is expected to start in 2023. [antaranews]